(Andrew and Patrique serves as Evangelist and Women’s Ministry Leader for one of the three Super regions -including their local region, the West – in the City of Angels church in Los Angeles)

Andrew & Patrique Smellie are both of Jamaican decent; Patrique was born in Kingston and Andrew was born in New York City! Both were baptized through the efforts of the Syracuse Church: Andrew in 2000 and Patrique in 2001. The Smellies are our “Renaissance couple!” Andrew attained a black belt in Goju-Ryu Karate, became the first African American President of Cornell University Glee Club, and was awarded a Bachelor and a Master’s Degree from this Ivy League College! Patrique is a graduate of Johns Hopkins University and earned a Law Degree from Syracuse University even “arguing a practice order” before the future Supreme Court Justice – Sonia Sotomayor! They were married on August 6, 2005 and God blessed them with two phenomenal children – Naomi and Isaiah! 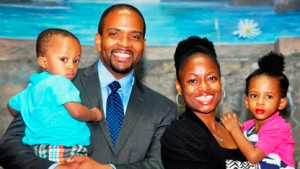 After the Brooms planted Chicago, Andrew & Patrique became the leaders of the Syracuse Church – “the little church that could… and did” – and then the Spirit called them to plant the Washington DC Church in 2008! After training in LA for two years with Elena & me, they built up the New York City Church. Upon being asked to go to Johannesburg, South Africa and to oversee the evangelization of Africa, Andrew immediately said yes, and Patrique just cried… not tears of sadness but tears of joy for this gracious opportunity to serve the Lord!